About a French war hero, my new favourite museum and where the Parisians love to picnic

One year without a tennis grand slam tournament on site really was enough. It is my 25th major as a sports journalist and it leads me to the biggest clay court event on this planet. Destination: Paris. Since my teenage years this is my favourite town. Café crème, pain au chocolat, baguette, the sound of the French language, the metro, the joie de vivre, the lovers in the streets – and of course Roland Garros. Nearly half of the journeys to the “big four”, – the Australian Open in Melbourne, the French Open in Paris, Wimbledon in London and the US Open in New York -, led me to the city at the Seine. To be exact: I make it a round dozen here.

Even if Paris can be beautiful in May, in terms of weather it nearly always shows also his less nice side. Same this year. But who looks and finds his hotel in the vibrant quarter St. Germain-des-Près soon is caught by the same good old feeling. Just sit down in a café at the boulevard St. Germain. Of course you should get a table right at the sidewalk. The chairs are always facing the street – people watching is a part of culture here. And most of the times you really can see the “chic” of this city. It doesn’t have to be expensive, but the people just dress with style. 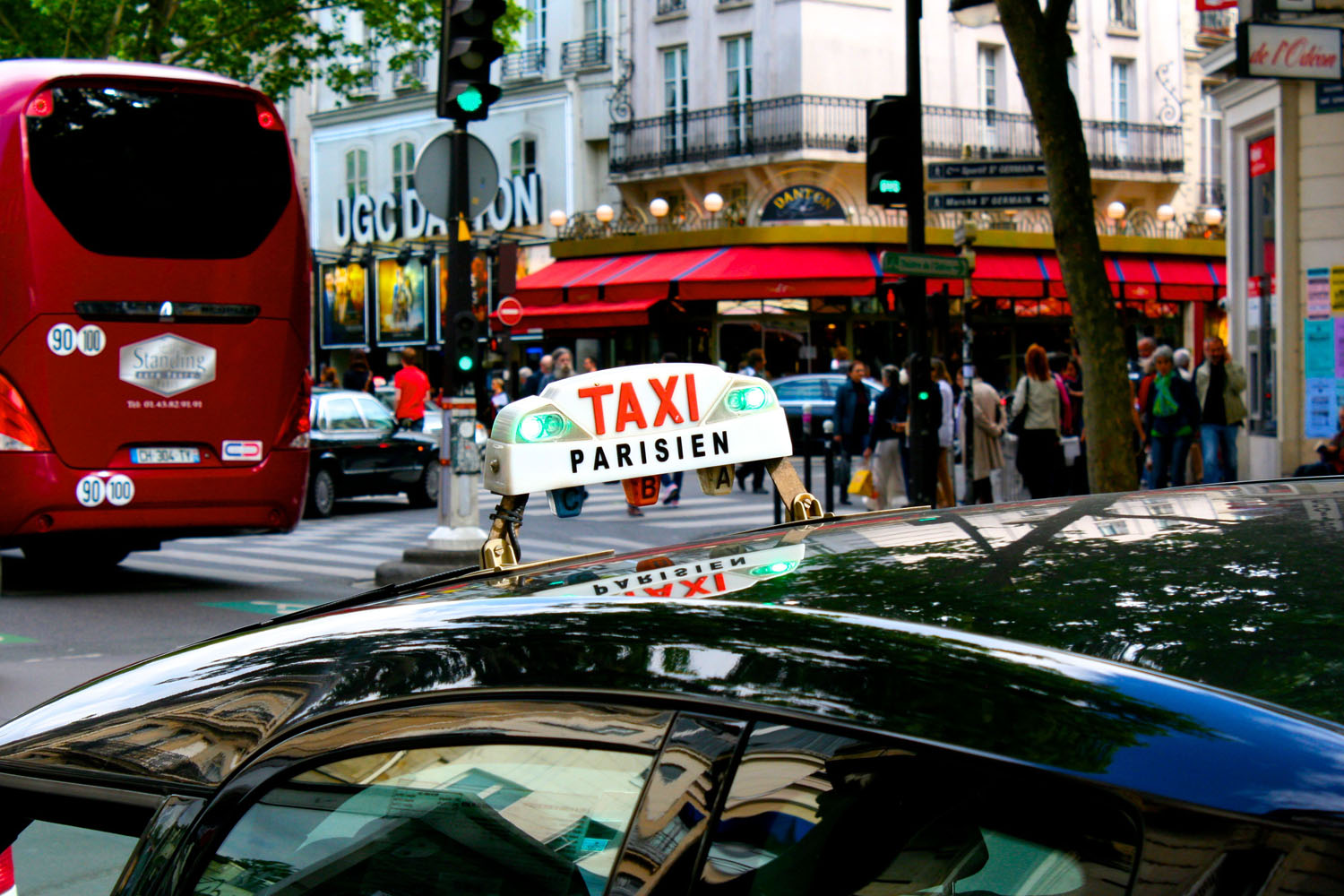 In the end of May and beginning of June this cosmopolitan city is devoted a bit to Roland Garros. The biggest clay court tournament carries its name since 1927 in honor of this pioneer of aviation and hero of the First World War. He was the first pilot who helped develop a machine gun which can shoot through the propeller. Well, fortunately on the courts it is not as martially. A few colleagues do use warlike descriptions though. A “fight” over five sets, in which each player uses his “weapons” like a hammering serve or a top spin, may lead to a “slaughter”…

Just having checked in in my hotel, I rush to the site. Into the metro number 10 and to the “Porte d’Auteuil” in the west of the city. There you’ll find Roland Garros. It is a huge complex, which has become too tight in all those years. Nowadays up to 430.000 people stream into this historic site – within a fortnight! Enormous amounts of fans flow between the side courts and you need a  lot of time. Sometimes you don’t find any seat in the stands. Even if I use my accreditation – this does not work.

After I found out which Austrian players are on court for training and I got my arm bow to access the players lounge I start my “hunt”. Only after I have my first interviews on tape and wrote my first story I breathe deeply. This year we have six Austrians playing in the singles main draw with two qualifyers. And there might be two second round hits which did occur later. After one year of absence in the grand slam circuit I meet a few lovely colleagues again. It is a little bit of a home coming. And you do feel a bit at home also if you stay at a hotel in the same quarter in all these years.

The past like five years I stayed in the quarter around Montparnasse and I chose a “French Italian” where you can eat late as my favourite restaurant. One of the waiters is a singer and he serenades his guests from time to time. Some while ago we even did this together. But this time I don’t see him and his colleagues, who work there literally since decades. This time I visit another Italian restaurant close to the metro station Mabillon – and I’ll be jiggered – there is a another waiter, who hasn’t seen me in five years. “Ah, Monsieur Roland Garros”, he says laughing and of course I can’t remember his name either. I sit down and take this lovely spring salad called „salade printanière“ with avocados. Still tasting nice.The guy puts down a glass of champagne because of old bonds. Yes, you can feel at home here. 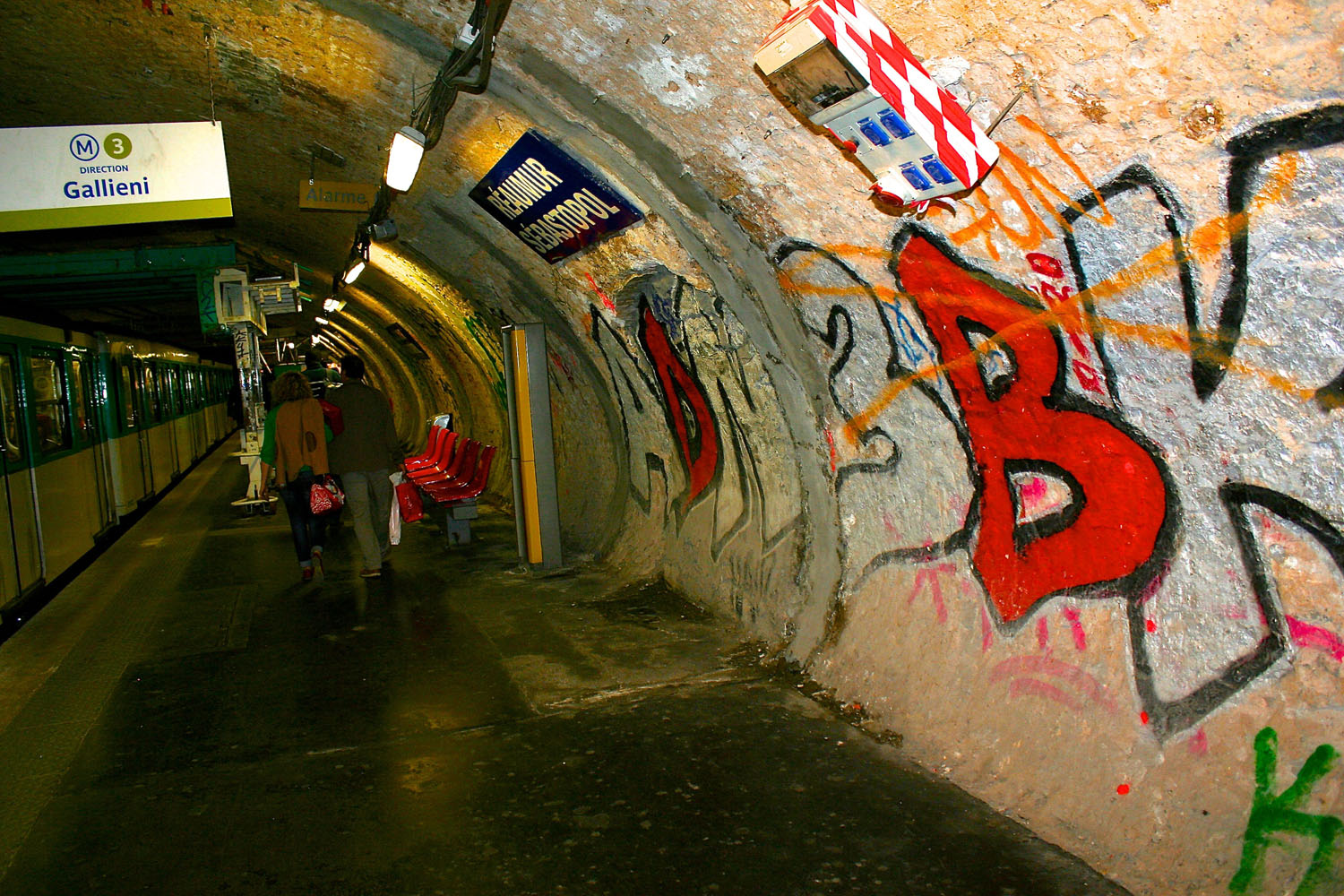 At a night stroll for a „dernier verre“ (a good-night drink) it might happen, that you run across a group of known faces from Switzerland. These colleagues also live in this arrondissement (district). With Roger Federer and Stan Wawrinka they have even two top ten players. Wawrinka has won this years Australian Open. But this time both of them loose early. Since the French Open win of Thomas Muster in 1995 Austria had to lower its sights. Jürgen Melzer was the only one who came close in 2010 by reaching the semifinal. And now this small country has one huge future hope called Dominic Thiem. Only 20 years old he has already gotten some international reputation. The Swiss guys know him especially well. Just a few weeks ago he has beaten their Stan in Madrid. “There you have one again”, I don’t only hear from the Swiss journalists. The Germans say the same with a bit of melancholy. They are still waiting for a strong young player. As well as the United States. A reporter of ESPN talks to me about Thiem and goes into rhapsodies about his skills and his nice character. And of course the Spanish colleagues are slightly nervous and ask about Thiem ahead of the hit against Rafael Nadal. Thiem shows, what we can expect of him in future, but he loses clearly in three sets. 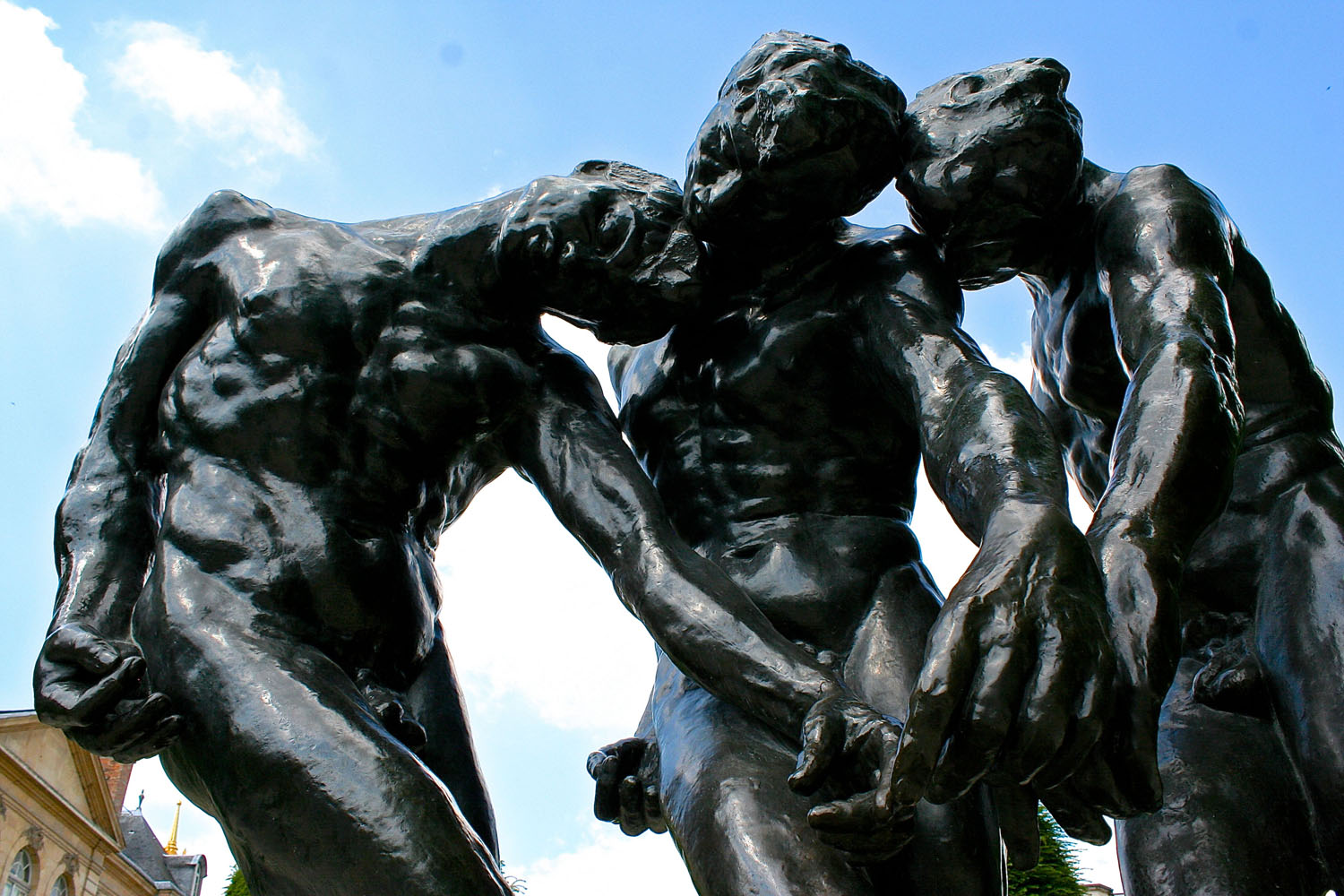 After six intense days my job in Paris is finished. Like so often I will not be there for the second week of the tournament. For this an Austrian has to reach the fourth round, the round of 16. But I decide to use my off days and stay – so I postpone my flight from Friday to Sunday. And I do not regret it. A friend and photographer, who has lived here, shows me some new hot spots in the city at the Seine river. And my plan is to visit the museum of famous sculptor Auguste Rodin. A wise decision which is rewarded with great weather. Rodins „The Thinker“, „The Gates of Hell“ and of course „Le baiser“ („the kiss“) impress me as well as the beautiful garden surrounding the „Musee Rodin“. I sit down on a park bench and finish a book about Paris. Two ladies sit next to me to work on their drawings of the garden. What a peaceful moment. 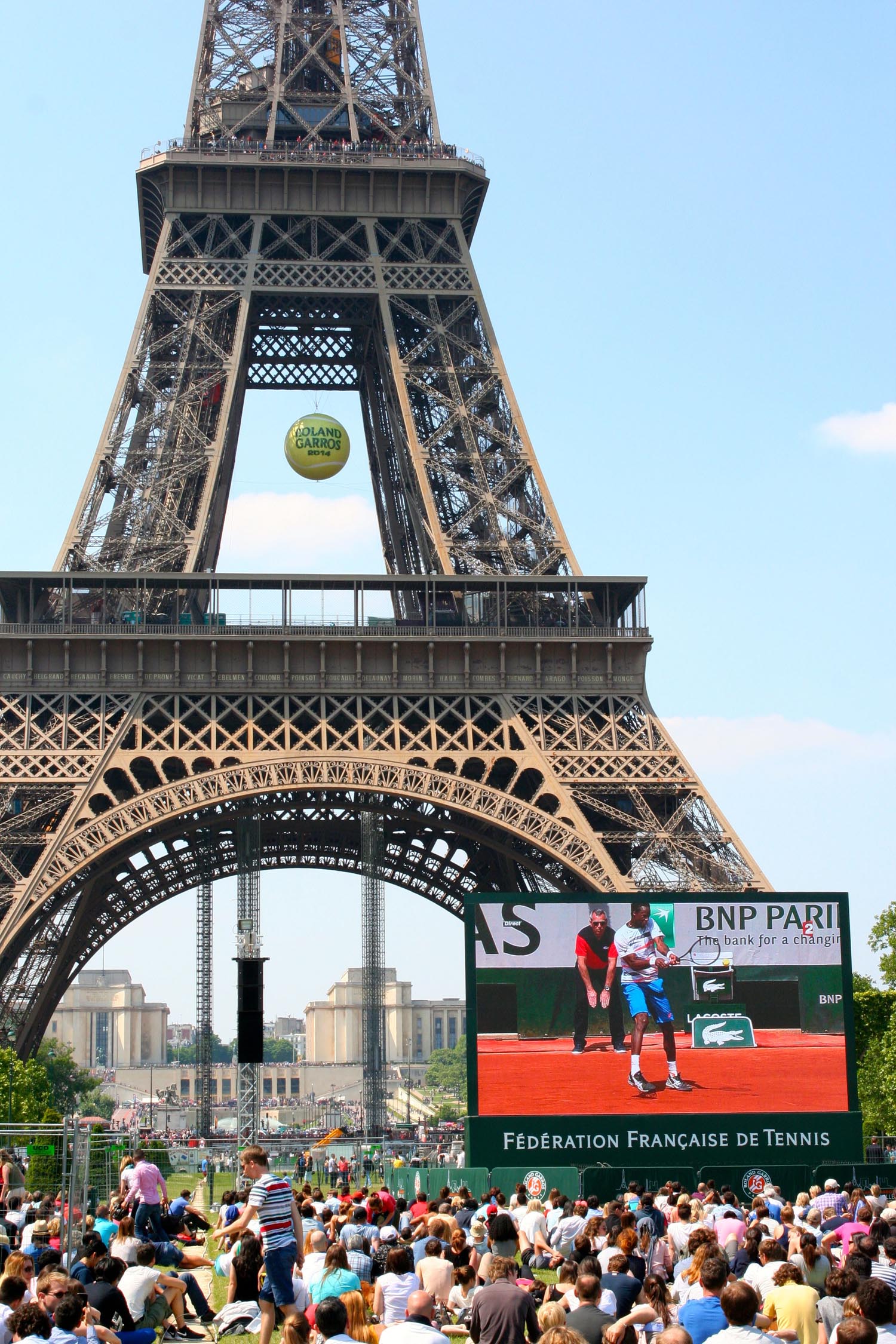 After this highly recommended trip I cross the “Dôme des Invalides” where tourists stream to because of the sarcophagus of Napoléon Bonaparte and go to the “Champ de Mars” right next to the Eiffel tower. And there you’ll find: Roland Garros. For the first time this year they have built a real clay court, a huge screen to watch tennis live and of course a boutique to get their merchandise – “Roland Garros dans la ville” (.. in the city”) it is called – and even within the probably most known building of the world their hangs a gigantic tennis ball. So tennis crosses me again while I am already mentally preparing my “au revoir” the next morning.

Walking on I see a wonderful green oasis right next to the Seine, march over the impressing “pont Alexandre” (world famous bridge) to the “Grand Palais” and take a metro back to the hotel. I buy a few books in French and German, to warm up my French. Let’s see if this ambition continues once I am home. But I did learn a few things, f.e. that a “café crème” always is a big cup. “There is no petit crème”, explains the waiter, “this is called a café noisette”. “Ah, oui!“

In the evening I have one last „mission“ to the Canal St. Martin. Since years this is a meeting point for young people or those who are young-at-heart to have a picnic. Wine bottles, snacks or even a whole dinner – they spend hours here. We eat at a table in a restaurant, before we sit down at the water with a smooth rosé wine. There are hundreds of people who spend their evening here and the atmosphere is unique. Right next to us a few teenagers have a battle in French rap – and soon we have chosen our winner. This guy should continue, he is good. The bottle is empty – in contrast to our neighbours we do not throw it in the water.

After a few hours of sleep at 6 a.m. music from my phone wakes me up. One last look out of my hotel room with the smallest shower on earth but a beautiful view. I am rewarded with a sunrise right next to Notre Dame. Time to clear up the room, into the taxi and the train to the airport. Adieu, Paris. A l’année prochaine! (till next year). 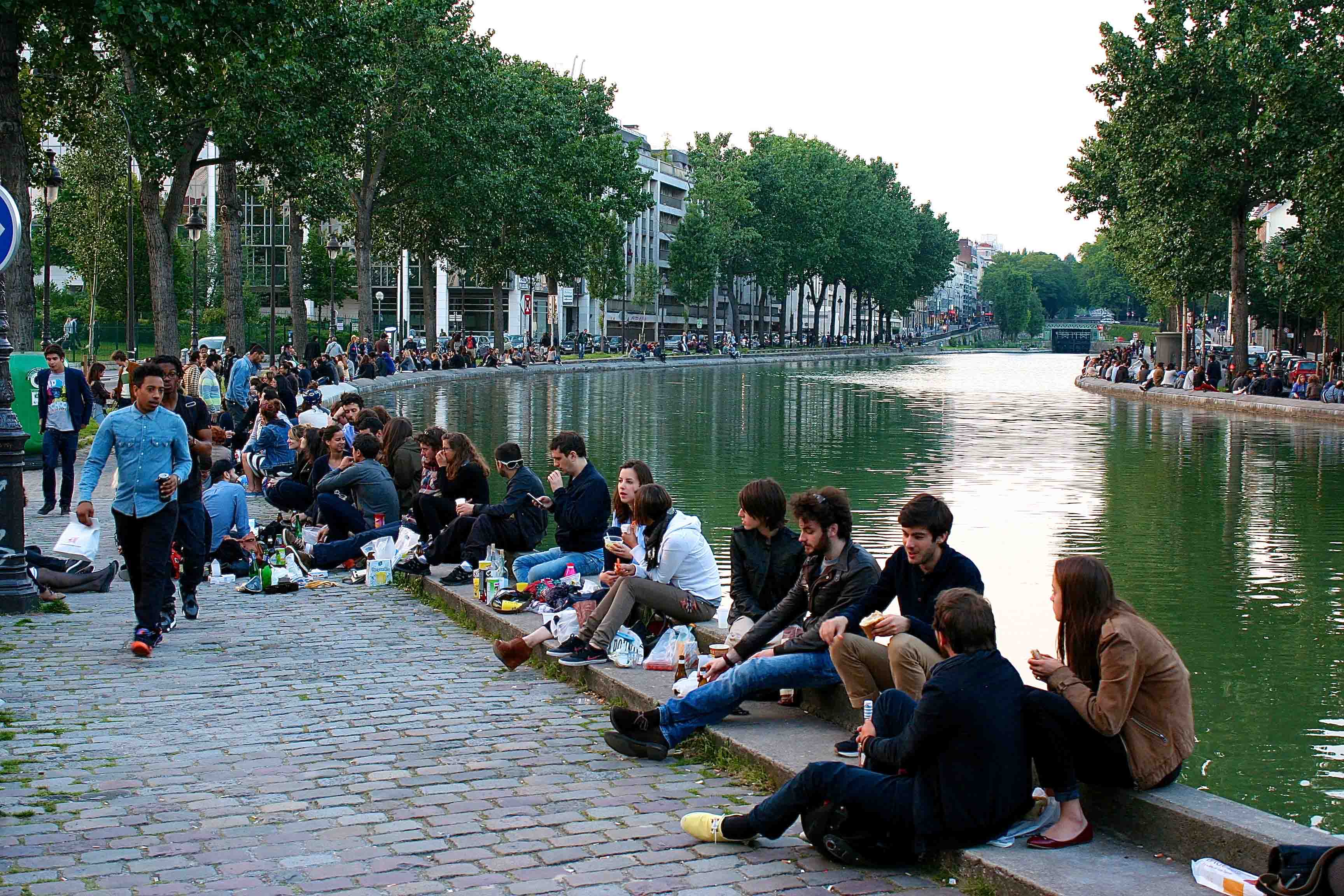