About gigantic plans for the US Open, a Caribbean parade in Brooklyn and a happy landing with Roger F.

Big, bigger, Big Apple or in this case – the US Open. This year I am back at the biggest annual sport event concerning audience on this planet. The numbers of fans who attend this grand slam tournament proof this and show that this major has deserved its home in the metropolis of superlatives. Over 700.000 people come to watch tennis each year in these two weeks in Flushing Meadows located in Queens.

The United States Tennis Association (USTA) invests around 500 million dollars to make the tournament site even more fit for the future. Starting 2018 even 800.000 fans are expected to attend. Already 2016 there will be a retractable roof on the biggest tennis stadium on earth – the Arthur Ashe Stadium. A new Louis Armstrong Stadium as well as a new Grand Stand follow. 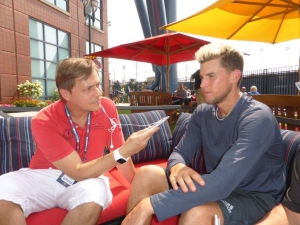 Three men represent Austria in the singles this year. For the first time Dominic Thiem is seeded and there are Andreas Haider-Maurer und qualifier Jürgen Melzer. 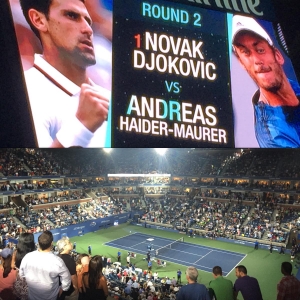 All three reach the next round which brings a highlight for Haider-Maurer just days before his wedding: night session in Arthur Ashe Stadium against Novak Djokovic, the world number one. Haider-Maurer was far away from an upset win but at least this was a unique experience for him so far.

On the day he turns 22 Dominic Thiem reaches round three. The rising star is not only Austrias future hope in this sport. He already climbed to spot number 20 in the ATP rankings – so the future actually starts now already. 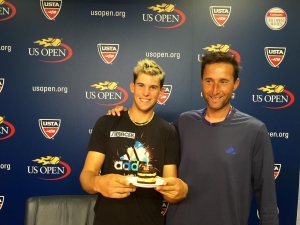 To celebrate his birthday the large interview room number one is reserved for Thiem. He gets a little cake as a surprise from the ATP and is interviewed for their website. We few Austrian journalists will end up eating this cake, since Thiem waives sweets.

The third round match for a spot in the last 16 is no piece of cake: Kevin Anderson is in top form on this Saturday, the South African wins in three sets, even if the result sounds a bit too easy. Thiem can’t repeat his round 16 from last year, but Anderson moves on to beat even Andy Murray to reach his first major quarterfinal.

Thiems loss means that I will follow the second tournament week only from Manhattan since my business trip is over. Serena Williams will not make the historic calender slam and Novak Djokovic avoids the long awaited major-title number 18 for Roger Federer. Djokovic is crowned „King of Queens“ for the second time. 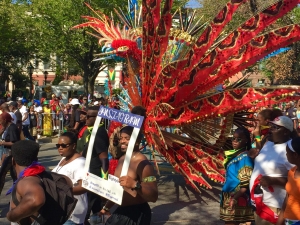 Before this happens I attend the famous West Indian Carnival Parade for the first time – a well worth seeing and gorgeous spectacle which is celebrated each Labour Day. It also shows how many people from the Caribbean live here. Hundreds of thousands line up on Eastern Parkway in Brooklyn. 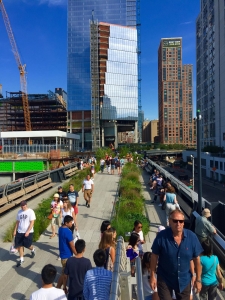 In addition I explore the complete „highline“ for the first time. In the area of a former rail trail which was above ground the city created a nice parc. Due to my family connections here New York is my second home but still there is always something new to discover. Only in May 2015 the new One World Trade Center was opened.

On day 17 of this trip it’s time to say Goodbye. This time I fly with Swiss Air and everything becomes full circle. Tired as I am I leave the plane for my pit stop – at the same time the finalist of the US Open crosses my way – including his family. Roger Federer has landed safely in his home country.