A star steps down – and a nice person: Thomas Morgenstern

Home/Eventblog/A star steps down – and a nice person: Thomas Morgenstern

A star steps down – and a nice person: Thomas Morgenstern

The eagle has landed

When the e-mail came in to announce the press conference about the future of Thomas Morgenstern everybody knew somehow already: the great career of this sympathetic guy from Austria ends – he is not even 28 years old.

But no one was really astonished about it. Triple olympic champion, double world cup overall winner and elevenfold world champion – Morgenstern has reached everything as a skijumper. But there were two terrible crashes last season, especially the one on January 10th 2014 in training for the flying hill competition on Kulm. From there on the necessary respect in such a dangerous sport turned into fear.

A craniocerebral injury, a contusion of the lung and even some days in the intensive care unit could not hinder Morgenstern to come back one more time. The aim Olympic Games is stronger than all those fears. In Sochi he talks open about his mixed emotions and in the end he grabs silver with the team. On this Februar 17th it was the last time, that Morgenstern put his name in a skijumping result list. The circle is complete. With a second place, which counts so much more than some of his triumphs.

But this time it is not about meters or medals. It’s about the end of a chapter in his life. Portrait and statistics are prepared and there we go to Salzburg. Morgenstern wants to announce his final landing in the pension as a sportsman in the Hangar-7 of his sponsor Red Bull. The camera teams are well positioned, Morgenstern enters the room. With a light mood he declares: „I do not want to torture you. I will end my sports career.” He did not succeed, he explains, in getting where he wanted to get. He means the trust in himself, the material or even changing wind conditions. 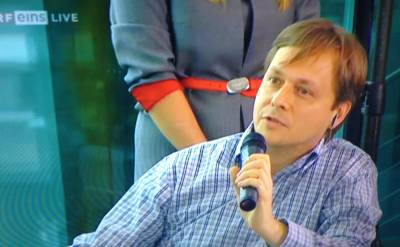 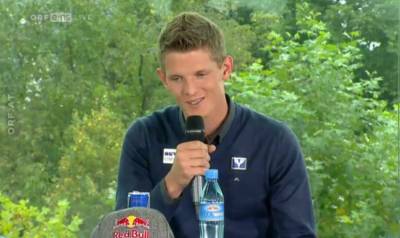 Of course there was also the question about motivation. The passionate helicopter pilot has won everything possible except of the individual gold at skiflying world championships. But Morgenstern would never go back on a huge hill again after his crash – that was obvious.

If it was also the responsibility he feels for his nearly two year old daughter Lily which influenced this decision, I ask him? He denies, but gives a deep insight. Watching his daughter playing he monogolized “with her” but of course she could not understand him – Morgenstern bursts out laughing – and like always this laughter is contagious. “She was the first I informed, even ahead of the training. I was already sure.” And he added reflectively: “I sat with her on the floor and said: ‘Lily, probably you will never see me jumping from a hill consciously und I soon will end my career’. This was a very touching moment for me, even if she couldn´t understand this.”

Patiently and relieved Morgenstern does his press conference which is shown live on national TV, has a lot of one-on-ones afterwards, and so I do my last interview with him.

I will miss this guy quite a bit in the skijumping-world. I experienced Thomas Morgenstern as humane, honest and not one time arrogant or grumpy. And the whole sports scene will miss his laughter. At the end I want this farewell picture with this nice person with whom I worked again and again in the last twelve years. Kudos to you, Thomas! All the best and safe landings in your future!